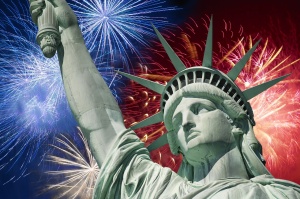 “This is my song, O God of all the nations,
a song of peace for lands afar and mine;
this is my home, the country where my heart is;
here are my hopes, my dreams, my holy shrine:
but other hearts in other lands are beating
with hopes and dreams as true and high as mine.

My country’s skies are bluer than the ocean,
and sunlight beams on cloverleaf and pine;
but other lands have sunlight too, and clover,
and skies are everywhere as blue as mine:
O hear my song, thou God of all the nations,
a song of peace for their land and for mine.”
–Lloyd Stone, 1912-1992/3, written in the interval between WWI and WWII when he was only 22

This song is one that our choir has sung several times around the 4th of July. I love it because it reminds me that just as we in the USA feel strongly about our country, its beauty, and our patriotism, so do people of other countries love their land, its beauty, and they are patriots too.

Over the years I have come to appreciate the freedoms we so often take for granted in the United States. I love my country, despite many things I see that make me recoil. A few things that come to mind are racial prejudice, the rich lording it over the rest of us, crooked politicians, a callous attitude toward those who are less fortunate than we, an air of superiority, and insistence that one point of view is right while everyone else’s is wrong. But though there are a lot of things that are wrong with our country, there are also many things that are right with it.

Traveling outside the U.S. has a way of making you see our country differently. When my husband and I visited Spain for a couple of weeks in March, I thought it was interesting to watch the news. There wasn’t much about the United States on their news. Oh, my…does that mean America is not the center of the universe, as we sometimes think we are?

This was our second trip to Europe; the first was 30 years ago. When we got home after that trip, I was so thankful for many things I’d taken for granted: air conditioning, ice in drinks, clean public restrooms without having to pay an attendant, being able to communicate in a common language. After our trip to Spain, I realized my perspective has shifted. We Americans are often spoiled. We visit other countries and expect things to be the way they are here. Well, they’re not.

I enjoyed our trip to Spain. We found the people friendly and helpful. Of course, it helped that I was able to communicate in Spanish. Not fluently, but my conversational Spanish was passable and I understood most of what I heard.

I’ve often heard it said that people are reflections of the way you treat them. If they treat you kindly, perhaps it’s because you send out vibes of kindness. If they are nasty toward you, maybe it’s because they sense some ugliness in you. Or maybe they’re just kind or nasty on their own…I don’t know.

On this trip, rather than thinking about what I missed about home, I started thinking about the advantages of being in another culture. It’s good to experience a slower pace of life, to linger over a meal for a while, to be anonymous in a crowd, to not feel like everyone owes me something (I don’t think I have that attitude as an American, but perhaps some of it is engrained in me).

I did come to appreciate the virtues of toilet tissue and having a commode seat (we ate in a few restaurants in Sevilla where these “amenities” were not available). I was also glad I took along a purse-size package of Kleenex.

Well, I am getting distracted now because my family is in the kitchen, so I will close. No really deep thoughts here, just appreciation for our country and its freedoms and the right to express my opinion and the right for others to disagree with me and the prayer that we will learn to appreciate the differences of others and embrace diversity and learn to practice compassion, listen more and talk less, and be a little more tolerant and forgiving of those who “push our buttons.” That is all.

One thought on “Song of Peace”